This post introduces an intellectual challenge. It formulates a problem, without giving any anwers. It is the kind of problem I like to wrestle with.

I have previously consulted welfare experts to express overall animal-welfare on a scale from 0 tot 10. I first did so for my PhD research when I consulted experts to validate welfare scores which I had derived through semantic modelling of the scientific literature about pregnant-sow welfare in different housing systems. Until now semantic models have been made to calculate overall welfare scores for pigs (sows), laying hens, dairy cattle and farmed fish (salmon). Using these scores it is possible to determine the level of welfare improvement, e.g. when alternative housing and managment systems are adopted. This makes it possible to assess the magnitude of welfare improvement, e.g. when sows are kept in groups rather than in individual housing.

Furthermore, welfare concern not only addresses the way animals are reared on-farm. It may also concern entirely different conditions such as transport and slaughter conditions. Pigs may be stunned electrically or using CO2. Fish may be gutted, immersed in ice water or stunned electrically. Different levels of animal welfare are associated with these different methods of killing animals. And each of these treatments has a welfare value, an expression of what it would be like for the animals from their point of view. Such welfare value can be expressed using the (more or less standard) scale from 0 tot 10. But if so, how should we compare welfare scores between conditions, e.g. between farming and killing? Such a comparison would be necessary if we want to know, for example, if there is more welfare benefit from rearing poultry in welfare concepts (like Freedom Farmed/Better Life) than from implementing gas stunning instead of electrical stunning. This may not be an easy task, as these conditions (farming vs stunning) vary widely in all dimensions of welfare (intensity, duration and incidence).

Suppose we could find ways to compare welfare across species and between diverging conditions within species. Would it then, in the end, even be possible to do both at the same time, i.e. to assess the degree of welfare improvement across conditions and species??? For example, would it ever be possible to compare the welfare benefits of say cage-free laying hens and proper stunning of farmed fish?

As I said, I won’t be trying to provide answers to these questions. However, if you would really want to and manage to focus on conditions with which you are fairly familiar, then, I think, most people probably can come up with some kind of reasoned opinion as to how such diverse conditions relate to each other in terms of animal welfare, and why. Perhaps you should just give it a try. 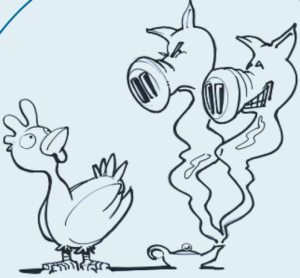 Figure from a brochure on semantic modelling.